This week we are featuring two cultivars of Ilex verticilata ‘Berry Heavy’ and ‘Sparkleberry’.

The Ilex genus contains over 400 various evergreen and deciduous trees, shrubs and climbers that thrive in a broad variety of plant hardiness zones.  Berry heavy and Sparkleberry deciduous shrubs belong to the Aquifoliaceae family. 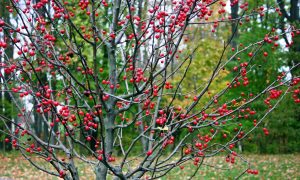 Winterberry is dioecious, meaning it requires both a male and female plant for pollination.   The berries appear on only the female trees, but don’t let that male out of sight, he must be within 50 feet of the girls for pollination.  The males are generous lovers, and a single specimen can pollinate about 6-10 females.

They can do without fertilizer, but thrive in soil that has a hearty portion of organic material in it.  When you’re ready to make the wise decision of putting of these beauties in the ground, do it around early autumn.  Get your hands dirty by digging a hole as deep as the Ilex’s root ball and about 2-3 times as wide.   Be careful not to plant it too deep, as you could unknowingly subject your bodacious new bird feeder to root rot. 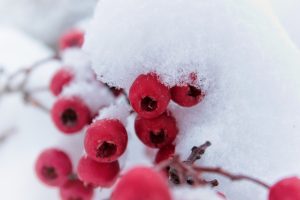 In the typical fashion of holly, they lose their leaves in the fall.  This allows the brilliant red fruits to shine center stage throughout the winter, making it a bright accent upon a snowy landscape. The berries remain ripe long into the winter, and though edible to most birds, they aren’t particularly pleasing in the mouths of humans.  Berries start showing up on the scene around summer and fall, lasting through winter until all the hungry birds snatch them up, depending on the other options at the buffet.   The delicate beaks and discerning palates of the birds prefer the berries after they’ve tenderized a bit, letting them freeze and thaw a few times before digging in.  Once ripe, the berries hold almost universal appeal in the leaner winter months for over 40 different species of birds as well as deer, and other small animals one would find indigenous to the locale. 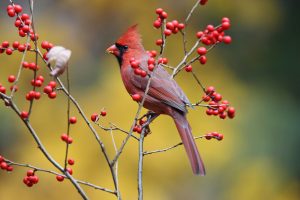 All varieties of winterberry like their soil wet like a Labrador kiss, so planting in boggy areas is a smart move.   Berry Heavy is no exception… It’s branches strain under the load of copious berries.  Both Berry Heavy and Sparkleberry host to a wide variety of fauna, and produce the berry of choice for the eastern bluebird.

The bark of these perennial shrubs is greyish-brown and has a mottled appearance, as it molts in strips, exposing the smooth young reddish brown inner bark. 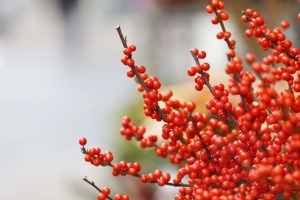 Deadheading Ilex verticilata is not recommended and pruning can hamper the growth of the future buds.   They prefer full to partial sun.  The slow growing Berry Heavy reaches 6-8 feet tall and 3-5 feet wide at maturity.  The Sparkleberry variety is a bit more spacious, rounding out at 6-10 feet high with equal spread.

A bit of Sparkleberry or Berry Heavy would be an eye catching addition to Zen gardens, contemporary garden designs, or a rustic cottage garden.   They can also put up with quite a bit of urban hardship, as they are road salt, dog pee, and smog tolerant.

Check out our above ground and B & B stock availability here.